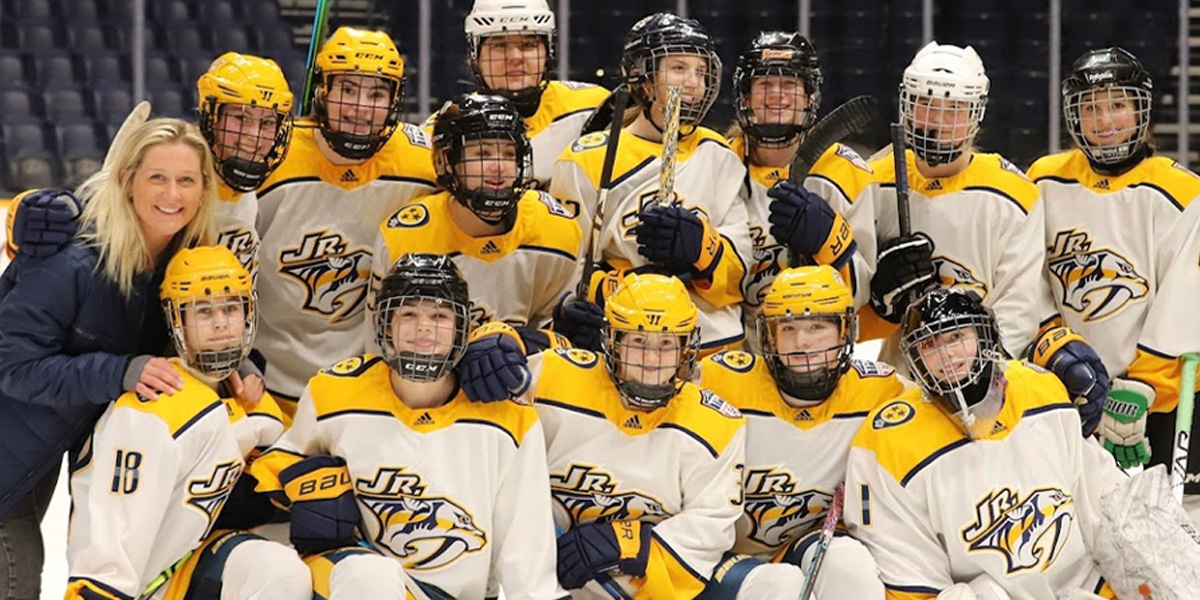 March 17, 2022///Anthony///Comments Off on Girls Hockey Program Continues To Grow

The Nashville Jr. Predators are excited to announce Mekenzie Steffen as the Girl’s Director for the Nashville Jr. Predators Girls program in 2022-2023 and beyond. Since Mekenzie came on board with our program, we have worked hand in hand with the Nashville Predators to develop and sustain a foundation for Girls hockey in Nashville that will last for years to come. Mekenzie is a Minnesota native and played Division I hockey at the University of Wisconsin-Madison under hockey legend Mark Johnson. While at Wisconsin, she won a National Championship and was named captain of the team her senior season. This will be Steffen’s second season with the Nashville Jr. Predators Program as she spent her first season coaching our U14 girls team. From the success of the Predators’ Grass Roots Girls initiatives to the NJP Girls Development skates held weekly, to the success of our U19 girls team, the girls demographic within Nashville has exploded.

Heading into the 2022-2023 season, NJP has announced the addition of two new girls teams, doubling the girls’ footprint within the organization. The Nashville Jr. Predators will be adding a 16U and 10U/12U team. Previously, the Jr. Predators have only offered 14U and 19U teams at the Tier II level. The addition of the 16U team will help bridge the gap from the 14U to 19U level, giving more girls the opportunity to be involved and to stay involved within the program.

The Jr. Predators will also be adding a 10U/12U team which will allow for the younger generation to be involved directly after developing within the Grassroots initiatives. We are ecstatic to announce that Jennifer Boniecki will be coaching the 10U/12U team next season. Boniecki has done an incredible job with Preds Girls Hockey out of the Ford Ice Centers here in Nashville. Boniecki has given girls of all ages the opportunity to participate in hockey, at no cost, with the support of the Nashville Predators and the NHL/NHLPA Industry Growth Fund.

The Nashville Jr. Predators girls program will feature an all-female coaching staff for the 2022-23 season as we look to build upon the success of this past season! More information can be found in our 2022-23 Season Prospectus and if you are interested in trying out, you can register here.