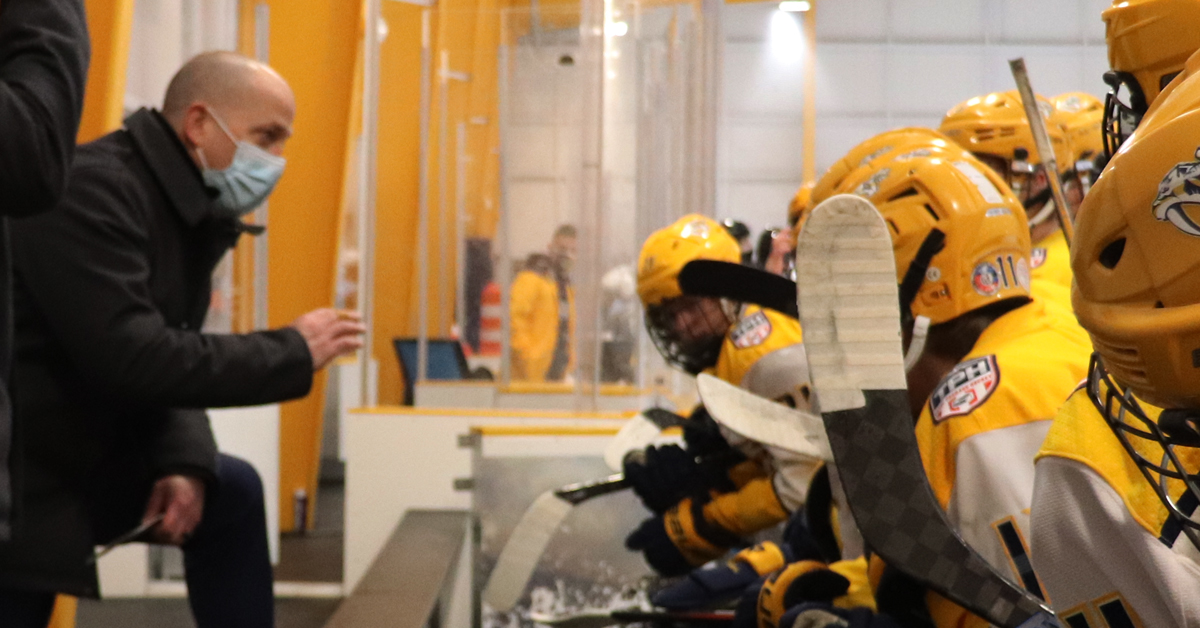 Jennings Announced as New Head Coach of the Aberdeen Wings

August 6, 2021///Anthony///Comments Off on Jennings Announced as New Head Coach of the Aberdeen Wings

“We are so happy for Steve and his whole family as he moves up to the NAHL to lead the Aberdeen Wings. After an incredible, record-setting season as the Head Coach of the 18U Jr. Predators that saw the most player commitments to junior hockey in the history of the program, it’s not a surprise this opportunity came this way,” said TPH CEO Nathan Bowen. “We are so grateful for Steve’s positive impact in Nashville as a coach, mentor, and positive role model to hundreds of players and staff over his long tenure with the club. This will further grow the TPH network, and we know Steve will continue to help players advance with this move.”

Jennings will be taking over for long-time coach Scott Langer, who will be exiting and announced his new position as Head Coach with the Fargo Force, a member of the United States Hockey League. (USHL). The two coaches are not strangers, Jennings has served as the Director of Player Personnel for the past five seasons with the Aberdeen Wings and worked directly with Langer since the 2004-2005 hockey season. During the 2016-2017 season with the Wings, he was influential and helped in capturing the NAHL’s Central Division Championship, as well as reaching the Robertson Cup final four. In this capacity, he has worked with the coaching staff and has helped build a long-standing winning tradition, while helping players pursue their hockey and life goals.

This advancement comes as no surprise, given Jennings countless achievements throughout his career with both the Nashville CoE and the Jr. Predators. He has done it all, from being responsible for programming and operations of the academy-style environment, to overseeing the application of TPH’s on and off-ice Hockey-Athlete Development Model, mentoring student-athletes, and executing all training and practice plans.

“I am very grateful for my time with TPH and the Nashville Jr. Predators. The last couple of seasons have been tremendous, and very rewarding,” said Steve Jennings. “From winning back-to-back Southeastern District Championships, this year’s Tier 1 Elite League Championship, an appearance at nationals, and all the player placements in junior hockey, we’ve all had success, and it’s been an honor.” “TPH has blessed me with the opportunity to work alongside some great coaches and people, and I am very appreciative of the work we’ve done to make Nashville a hockey destination for players and families.”

Prior to his time at TPH, Steve grew up in the Boston area and played in college at the US Naval Academy, where he captained his team to the National Tournament in his senior year. In 1991, after graduation, he began coaching at his Alma mater, and the rest has been history. Jennings has coached club hockey at Lehigh University, as well as multiple youth hockey programs throughout the United States. His coaching styles have brought skills and victories to Pennsylvania, New Jersey, Texas, and Georgia, where he relocated to coach in the Jr. Predators program. Since the mid-2000’s he has been a Tier II Junior ‘A’ level scout, and served as the Director of Player Personnel for the Santa Fe RoadRunners and the Topeka RoadRunners of the NAHL.