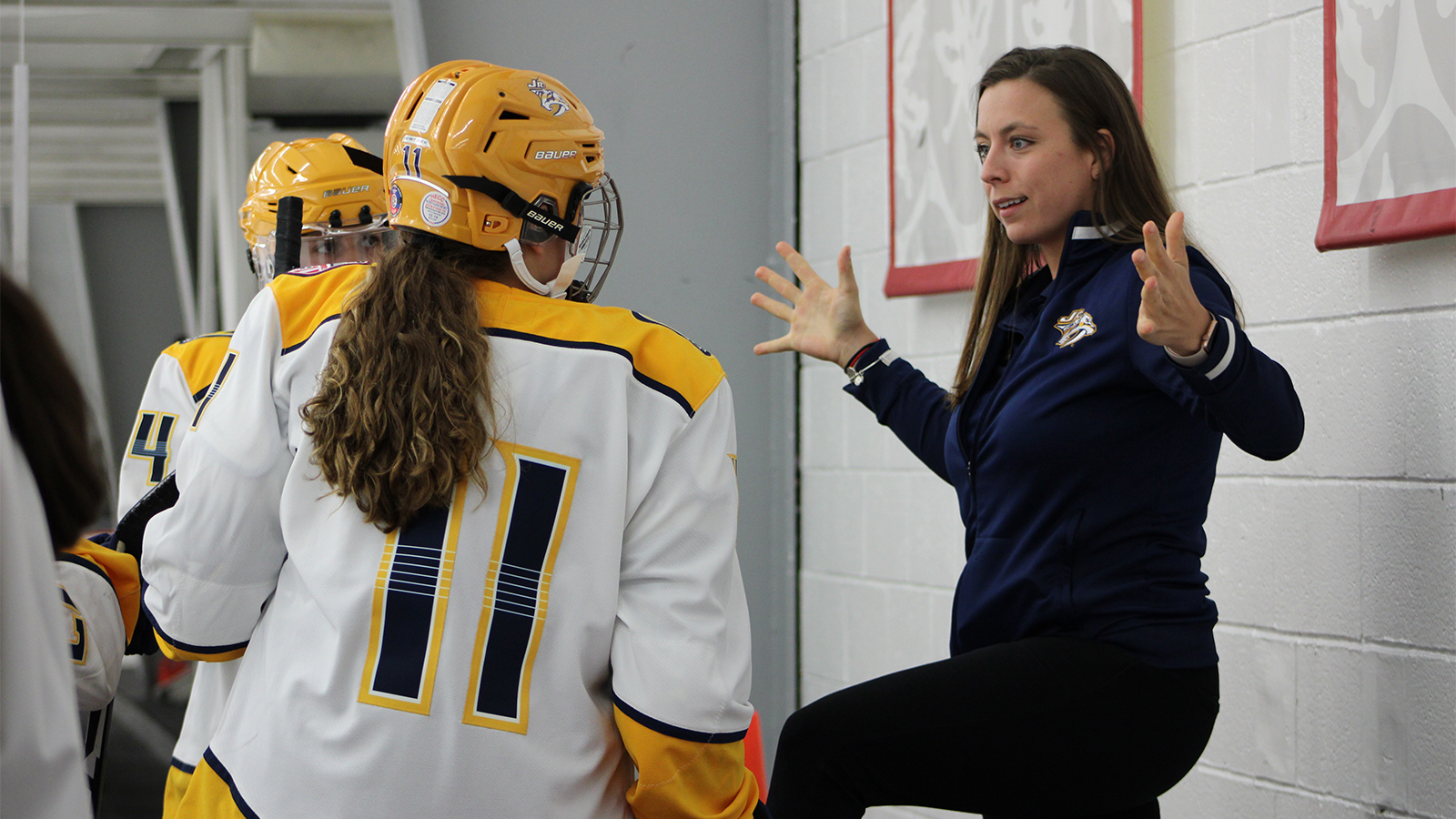 In addition to serving as head coach of the Nashville Junior Predators Tier II 14U Girls team – and assisting with the Girls 19U club – LaCombe also has a full-time job running The Lab in Franklin as a coach and hockey director.

But when the opportunity to join the Connecticut Whale of the National Women’s Hockey League – a professional women’s league in North America, and a dream situation for the former collegiate and pro hockey player – LaCombe found a way to rework her planner.

“My dream as a kid was always to play professionally in the United States of America,” LaCombe said from the Predators team hotel in Minnesota earlier in the month. “Growing up, there was never that option for girls. We didn’t really have a league to look up to, so I think it’s more about being a role model and kind of showing the younger kids you can do this. You can get paid to play hockey. It’s still growing, and it has a ways to go, but I’m just happy to be at the forefront of it right now and hopefully create something sustainable for those girls coming up.”

It was fewer than four years ago when LaCombe, a native of Minnesota, landed in Nashville. Following an NCAA career at the University of Syracuse, and then professional stints in women’s leagues in Europe and Asia, LaCombe came back to her home country to find a way to stay around the game.

The stop in Nashville didn’t have much certainty to it, but as so many do, she fell in love with her new town and wanted to stay. Also, as the hockey world tends to do, other opportunities began to present themselves, and LaCombe soon found herself becoming ingrained in the hockey culture in Music City.

She got involved with girls hockey with the Nashville Youth Hockey League, and then coaching opportunities with the Nashville Junior Predators arose, as they recently combined forces with Total Package Hockey. LaCombe has been a driving force behind it all, and now some of the top girls hockey teams in the nation hail in Nashville, of all places.

“We go into a rink, and everyone says, ‘Oh, we love your [jerseys with the Preds logo on them], those are sick,'” LaCombe explained. “And the biggest thing I get from college coaches is that if a kid from the south is this talented… they just see so much potential, and that’s just really showcasing to these northern teams and schools. When we go up to Boston and beat them, when we go to Detroit, we win and people are astounded.”

For all the work that has gone into turning the girls Junior Preds programs into legit contenders, LaCombe still always had her ear to any potential opportunities for her to still put on a jersey again too. She didn’t have to wait long.

LaCombe had previously skated with one of the players for the Whale of the NWHL, and they had been seeking out the Nashville coach’s services on the ice. After a phone call that led to a professional tryout, Lacombe signed with the team and appeared in five regular-season games before dressing for two more playoff contests.

She scored a goal in Connecticut’s 5-3 win over Buffalo on March 6, and that was less than a week after she made a stop with the Preds in Minnesota following the Whale’s weekend series in the state just days earlier.

“Yeah, my body hurts,” LaCombe laughed as she recalled all the travel and time on the ice as of late. “I’m trying to balance [coaching and playing], and deep down I’m always going to be an athlete. I’m a very competitive person, so if I get an opportunity to play, I will while I can… Playing and coaching, it’s kind of just in my blood right now. I don’t really think twice about it.”

Following that playoff victory, Connecticut’s season came to an end two nights later, allowing LaCombe the time to get back on another airplane a see the Junior Preds Girls U19 team advance to the USA Hockey National Championships.

It’s all in a few days work for LaCombe at her jobs that don’t really feel like jobs at all. The schedule may be hectic, but being on the ice makes it all worth it.

“I’m most proud of the fact that I’m really just a small-town kid from Minnesota who is living their dream of playing professional hockey, while maintaining a full-time job, and in coaching, too,” LaCombe said. “It’s rare that you get to do all those things at once. And then, to see the girls I’ve had since Day One now going on to play at higher levels, you know these kids are going so far in life. I’m proud of playing and helping them reach their goals at the same time.

“To hear players call me Coach Allie… it’s so gratifying to watch them get better and now go to college to play. They say, ‘I want to be like you.'”

It’s stories exactly like this that prove the importance of women and girls finding involvement in the game of hockey now and in the future. If you or someone you know is interested in learning how to play hockey, click here.

Briere and Nichol Drafted to USHL