Nashville, TN — The Nashville Jr. Predators are proud to announce the hiring of Zach Jackson as the new Tier II Director for the Nashville Jr. Predators. Jackson will have a focus on the Tier II division to ensure the quality and attention to detail for the families and players. Clear communication with the parents and a focus on development with the players are things he is very passionate about. He is also tasked with the growth and unity of competitive hockey within Nashville, while developing and mentoring future student-athletes who are eager to improve and be the best Tier II player they can be or eventually advance into High School hockey or Tier I hockey.

JP Dumont, newly named Director of Hockey Operations praised the character and reputation. “ZJ is an awesome person to be around and someone I would want to mentor my children. He is extremely well respected in the Nashville hockey community and his positive attitude is impactful daily. We are very fortunate to have him join the team and serve as our new Tier II Director for the Nashville Junior Predators program.” In addition to Jackson overseeing all Tier II programming, he will also serve as the coach for the Jr Predators ‘09 AA squad. 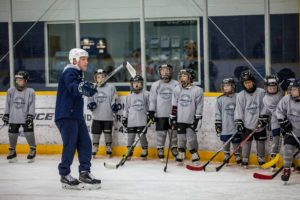 Jackson comes home to Nashville after spending the last 18 months as the Assistant General Manager with the New England Sports Center in Marlborough, MA. During his tenure in Massachusetts, he oversaw the development of all facility operations, events, and programs in addition to creating the NESC Development League and assisting with the operations of the Minuteman Flames AAA Program within the Eastern Hockey Federation.

Before moving to Massachusetts in 2018, Jackson worked as the Senior Hockey Manager for the Nashville Predators since the inaugural opening of the Ford Ice Center in Antioch, TN. While helping to establish the foundation of the Predators grass roots, Learn to Play, and House League programs, he was key in creating many programs, leagues, and camps that still operate to this day including the Preds Select Travel Program.

Zach will be moving back with his wife Jayne, a Nashville native, and son, Weylin. When not on the ice, Zach enjoys fishing with his son, rock climbing, and outdoor adventures with the family. 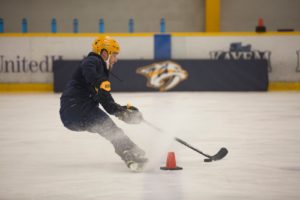 Before his time with Jr Predators, Zach was the Assistant GM at the New England Sports Center, an 8 rink facility in Marlborough, MA. Before moving to Massachusetts, Zach went from Coordinator to Senior Hockey Manager while with the Nashville Predators from 2014-2018. There he helped created the foundation for youth hockey within the Ford Ice Center and started the Preds Select Travel program in addition to many other leagues and camps. He also served as the US Ambassador for Hockey Without Borders/Hockey Sans Frontieres. While with Hockey Without Borders, he coached within Subotica, Serbia HJ Spartak Hockey youth program, as well as, clinics/camps in Serbia, Bosnia, Hungary, Croatia, and Slovenia. Zach also served as the Hockey Director for Camp Laurel in Readfield, Maine from 2011-2013 and was the Assistant Men’s Ice Hockey Coach at the Florida Institute of Technology Club Hockey Team.

Zach ended his playing career after a brief season with HK Spartak in Subotica, Serbia within the Serbian Championship League. Before living in Europe, Zach played club hockey at James Madison University and spent his youth playing within the North Virginia Ice Dogs U-18 AA (CBHL) and Tri-City Eagles (CBHL) AA Youth Program in the Maryland/DC Metro Area. Zach was the recipient of the Washington Capitals Hobey Baker Character Award in 2007-2008, Maryland State Hockey Leagues Top 3 Player to Watch Honors in 2004-2005 and participated within the Swedish Development Camp for the Tri-City Eagles Exchange Program.