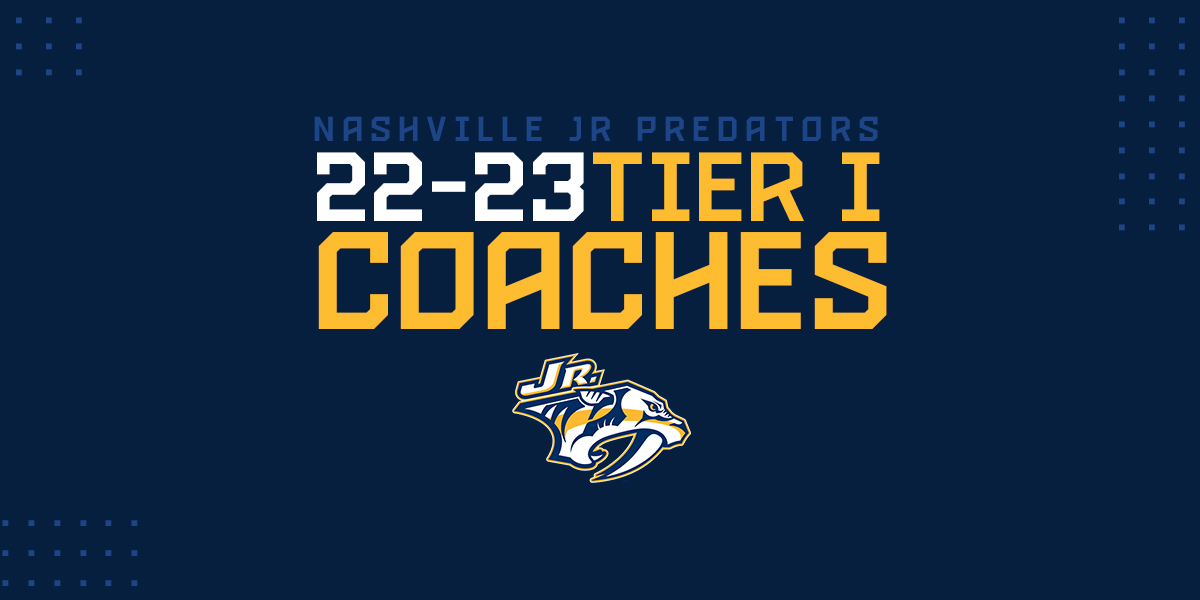 The Nashville Jr. Predators are excited to announce the Boys Tier I coaching staff for the 2022-23 Season. Tryout dates will be announced in the coming weeks. Best of luck with the remainder of the season!

Originally from Kingston, Ontario, Tim McAllister has more than 20 years of coaching and instructional experience. Coach Tim was one of the co-founders of Thunder Hockey. He won 2 NJCAA National Championships in 1996 & 97 as well as being named an NJCAA All-American for those years. Tim is entering his fifteenth season with the Nashville Jr. Predators.

Originally from British Columbia, Canada, Ty played three years of Junior hockey in the British Columbia Hockey League (BCHL). After his Junior career, Ty played four years at Utah State University, ACHA II going to nationals all 4 years. He is heading into his 8th season of coaching and is a level 4 USA Hockey certified coach. Ty is entering his second season with the Nashville Jr. Predators.

Coach Kevin Montgomery is from Rochester, NY, and played for the US National Team Development Program from 2004-2006, winning the U18 World Junior Championship Gold Medal. He was drafted by the Colorado Avalanche in 2006 as the 4th-round pick, #110 overall. He also played in the Ontario Hockey League for the London Knights from 2007-2009. Kevin is entering his fourth season with the Nashville Jr. Predators.

Originally from Montreal, Quebec, JP Dumont had a very successful 12- year NHL career playing for the Chicago Blackhawks, Buffalo Sabres, and the Nashville Predators. JP has been a part of the Nashville hockey scene for the last 13 seasons as an NHL player, youth coach, and junior coach. In addition to his coaching role, JP serves as the Director of Hockey Operations for the Nashville Jr. Predators.

Coach Schell grew up in Scott, Saskatchewan, and played AAA in Western Canada. Upon finishing his youth career, Brad was drafted by the Spokane Chiefs of the WHL. He played four seasons for the Chiefs including 2003-2004 where he led the team in scoring with 92 points. Brad was selected by the Atlanta Thrashers in the 6th round in the 2002 NHL draft and went on to play professional hockey for 11 seasons in North America and Europe. Brad is entering his 7th season with the Nashville Jr. Predators.

A native of Riga, Latvia, Zirnis previously served as a coach in the Thunder ‘AAA’ program following his retirement from the professional game in 2010. Since his first stint with NJP, Zirnis has enjoyed coaching stops at both the junior, collegiate, and international levels. He has captured a Robertson Cup Championship as Head Coach of the NAHL’s Shreveport Mudbugs, has spent three seasons as an Assistant Coach at the NCAA Division I level, first with the University of Alaska-Fairbanks and then at his alma mater, the University of Alabama-Huntsville. Additionally, Karlis has coached with the Latvian Hockey Federation since 2014. Zirnis also serves as the Director of Player Personnel for the Amarillo Wranglers (NAHL).

***Pending Tier I Approval from the SAHA Board***