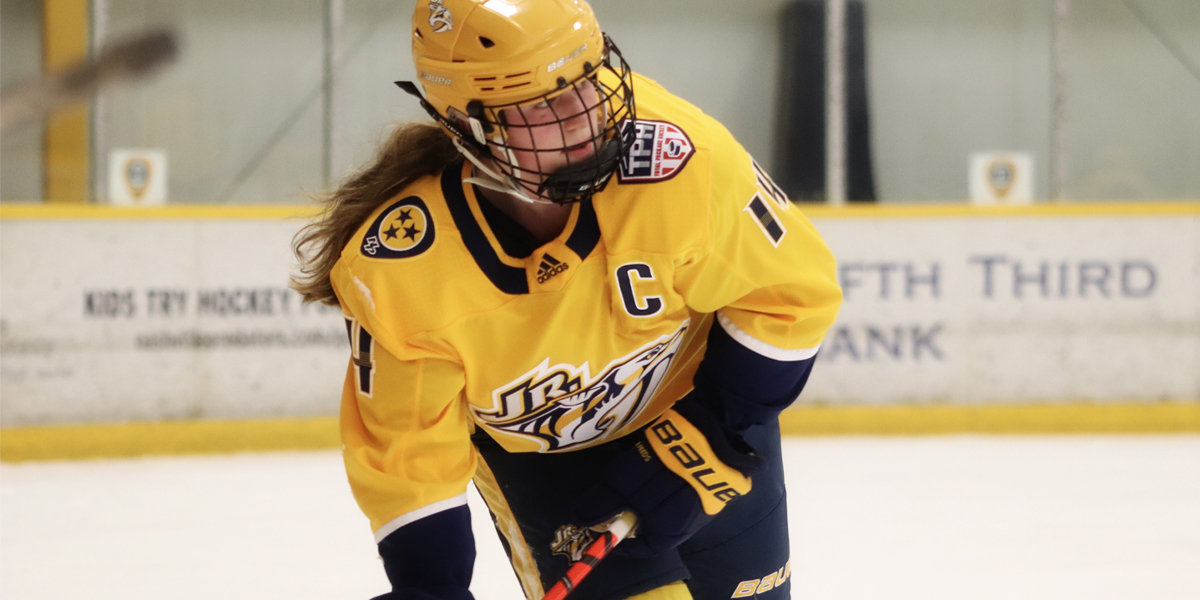 Russell, defenseman, has been a proven performer with the Jr. Predators tallying 96 points (30g, 66a) over 114 games. This season Russell’s experience and leadership earned her the captaincy and she has continued to set the pace on the scoresheet as well totaling 33 points through 30 games this season.

“On behalf of the Nashville Predators, we are ecstatic for Sydney and her family,” stated Kristen Bowness, Nashville Jr. Predators President. “She is a great leader both on and off the ice and a fantastic role model for all girls throughout the Nashville area. A prime example of how hard work and a strong character can lead to huge success – something all young hockey players should focus on. Congratulations Sydney, we will be cheering for you!”

“She has a tremendous work ethic and has been a staple in building this program the past 6 years,” said Kahlie Singletary, 19U Girls Head Coach. “The skills and leadership she learned here are a huge asset for Stonehill as she helps build and contribute to the Skyhawks next season.”

Russell’s success should be no surprise to anyone. Her older brother Trevor has seen similar success playing his entire youth hockey career in the Jr. Predators organization and entered his freshman season at Michigan Tech this season. The Russell family has always been supportive of their children and has in turn helped our organization grow.

Stonehill College, located about 25 miles south of Boston, announced in 2019 the addition of their 23rd varsity sports program, Women’s Ice Hockey. As eager as the institution was to hit the ice for their first season, COVID restrictions provided many obstacles in recruiting and lead to the postponement of the Women’s Ice Hockey Program’s Inaugural Season to 2022-23.

The Stonehill women’s program will be led into their inaugural season by Head Coach Tara Watchorn. Former Boston University Assistant Coach and 2014 Olympic Gold Medalist for the Canadian National Team, Watchorn will bring much experience to the Skyhawks program and we are confident that this will be a fantastic fit for Russell to be successful.

From the entire Jr. Predator organization we are very proud of Russell’s accomplishment and would like to congratulate her for this achievement.